Are you a GMB member and also an elected Labour Councillor? Then this is the place for you! Visit the GMB Councillors Network pages below for further information & updates. More Since the introduction of the Central Executive Committee Special Political Report in 2012, GMB has made considerable progress on increasing our political organising agenda. More Politics is important to GMB. We work with Labour MP's, MEP's, MSP's, Welsh Assesmbly Members, GLA, and local Councillors through our networks sharing our aims and values. More Despite the results in the last General Election, Local councils will still feel the pain of devastating cuts to Local Authority budgets. More With reports from the government that the economy is recovering, there is still the feeling that many working people are not benefiting at all, in fact most families are £1,600 worse off that they were in 2010 . More The Trade Union Bill is currently going through parliament. It is nothing but an ideological attack on the ability of trade unionists to organise both industrially and politically. . More 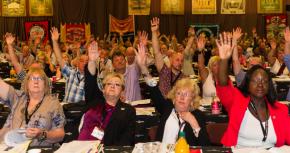 Over the past few months some GMB regions have organised Regional Councillors conferences, which have been very successful. More