GMB and UNITE launched the Freedom for Ocalan campaign at the House of Commons on April 25th, 2016

Kurdish leader, Abdullah Ocalan, has been imprisoned in total isolation on the Turkish prison island of Imrali since 1999. Despite his ill-treatment by the Turkish authorities, Mr Ocalan has fought consistently to bring about a peaceful reconciliation to the Kurdish question. GMB believes that his freedom is essential to end conflict not only in Turkey but also in the wider Middle East. For more information visit  http://www.freedomforocalan.org/

Transnational corporations are aggressively pushing a free trade agenda that would give them unprecedented powers to influence governments' policies on the provision of public services. Investment treaties such as the proposed Transnational Trade and Investment Partnership (TTIP) between the European Union and the USA include clauses that would allow big companies to sue elected governments that fail to do their bidding. GMB is categorically opposed to this corporate assault on our rights and has signed up to the Alternative Trade Mandate, a European-wide initiative endorsing democratically-controlled trade and investment policies that promote a more equitable distribution of the world's wealth; protect and promote human, social and cultural rights; protect the commons and contribute to environmental protection. More details of the ATM can be found here: http://www.alternativetrademandate.org/why-supporting-the-alternative-trade-mandate-some-responses-in-video/

No World Cup in Qatar without workers rights 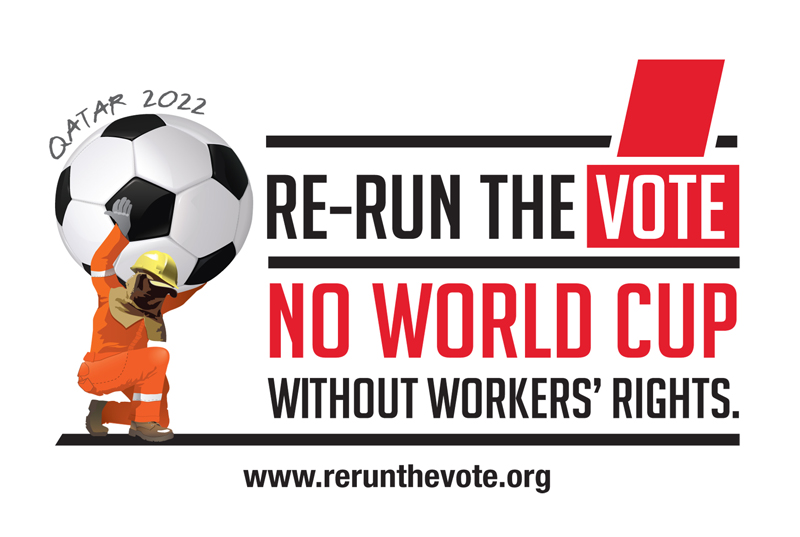 GMB is supporting the International Trade Union Confederation (ITUC) campaign to improve workers' rights in Qatar. In 2010, the country was awarded the 2022 World Cup by the World Football Association, FIFA in a process marred by allegations of corruption and ballot rigging. The global trade union representing professional footballers has said that it would be extremely dangerous to ask players to perform in the 50 degreee heat of the desert but even worse are the conditions faced by migrant workers who will be building the stadiums and the infrastructure for the tournament. Per capita, Qataris are the richest people on the planet but guest workers from different parts of Asia such as Nepal are mercilessly exploited, face death and injury and have no protection in law. Until such time as their rights are respected, there should be no World Cup in Qatar. More details of the campaign can be accessed at http://www.rerunthevote.org/

Workers on Costa Rica's pineapple plantations have to endure appalling working conditions and anti-union employers. This report from the Guardian newspaper was made in conjunction with GMB's partner union SITRAP and vividly illustrates the problems they face.

GMB supports the Make Fruit Fair Campaign which is funded by the European Union and produced by a consortium of NGOs, including our partners, Banana Link.

GMB supports the War on Want campaign to ban the practice of sandblasting in the manufacture of "faded" look jeans. Their report, Breathless for Blue Jeans ,highlights the dangers faced by Chinese garment workers.

At their Congress in Plymouth, GMB members voted unanimously to support an appeal for funds to help Costa Rican union SITRAP who had lost computer equipment and files during a politcially motivated break-in at their headquarters in Siquirres near the Atlantic coast. The thieves removed files and records from SITRAP's legal department who were starting to achieve some success on behalf of their members in Costa Rica's notoriously slow judicial system. Conditions for workers on the country's banana and pineapple plantations are poor and workers face an uphill stuggle in the face of a sophisticated union-busting operation by reactionary employers who enjoy the tacit support of a government that fails to live up to its statutory obligations.