Asked why he had dedicated his life to the labour and trade union movement GMB founder Will Thorne explained, "There is a world of freedom, beauty and equality to gain, where everyone will have an opportunity to express the best that is in them for the benefit of all, making the world a place more to our heart's desire and the better to dwell in." These principles guide GMB today.

The union began as the Gas Workers and General Union was formed in March 1889 in East London by one of the greatest pioneers of the Labour movement, Will Thorne.

"A resolution was passed in favour of a gas workers' union being formed, with the 8 hour day as one of its objects…Sunday morning March 31st 1889- a lovely sunny morning - was the birthday of the National Unionof Gas Workers and General Labourers." Will Thorne founder of GMB.

Its first battle in spring 1889 ended with the birth of the 8 hour working day. This set the goal for all working people who until then toiled for 12 hours a day.

GMB as it is today is the result of mergers and amalgamations of unions throughout the last century but mainly in the last 30 years.

Founder Will Thorne was born in Birmingham in 1857. He lived in great poverty and began his working life in a brickworks at the age of 6. 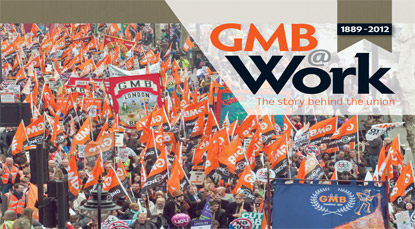 GMB@WORK - The Story Behind the Union by John Callow: The story of GMB, how it started and how it has developed