Blacklisted tells the controversial story of the illegal strategies that transnational construction companies used to keep union activists away from work. 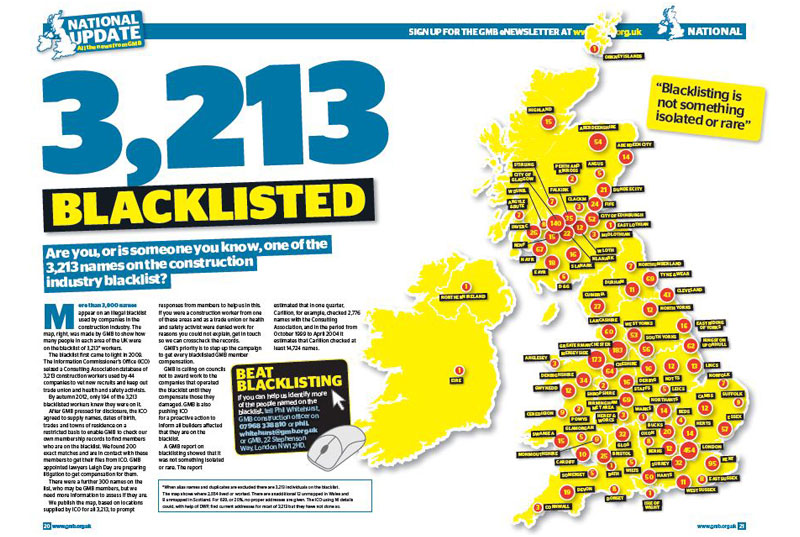 Are you or is someone you know one of the 3,213 people named on the construction industry blacklist? Help GMB find the people banned from work during the 70s, 80s and 90s by this illegal blacklist so that GMB can fight for compensation for them from the giant building firms that denied them the right to work.

BEAT BLACKLISTING
If you can help GMB identify more of the people named on the blacklist,contact GMB at blacklisted@gmb.org.uk

The blacklist first came to light when in 2009. The Information Commissioners Office (ICO) seized a Consulting Association database of 3,213 construction workers which was used by 44 companies to vet new recruits and keep out of employment, trade union and health& safety activists.

After GMB pressed for disclosure, the ICO agreed to supply names, date of birth, trade and town of residence, on restricted basis to enable GMB to check our own membership records to find members who are the blacklist. We found 200? exact matches and are in contact with these members to get their files from ICO. GMB appointed lawyers Leigh Day is preparing litigation to get compensation for them.

There were a further 300? names on the list, who may be GMB members, but we need more information to assess if they are.

We publish the map, based on the locations supplied by ICO to us for all 3,213, to prompt responses from members reading this magazine to help us in this. If you were a construction worker from one of these areas and you as a trade union and health & safety activist were denied work for reasons you could not explain get in touch with us and we can cross check the records. Let your friends who worked in construction see it too.

GMB priority now is to step up the campaign to get each and every GMB member, whether that’s now or at the time the list was compiled, blacklisted proper compensation.

GMB is calling on local councils not to award any more public work to the companies that operated the blacklist till they compensate those they damaged. Not a single company has yet been punished. GMB is also still pushing ICO for a proactive action to inform all builders on the list that they are on the blacklist.

A GMB report on blacklisting showed that it was not something isolated or rare. The report estimated, that in one quarter, that Carillion for example checked 2,776 names with the Consulting Association and in the period from October 1999 to April 2004 it estimates that Carillion checked at least 14,724 names.

The Scottish Affairs Committee was seeking evidence on blacklisting and you can see the proceedings and evidence at http://www.parliament.uk/business/committees/committees-a-z/commons-select/scottish-affairs-committee/inquiries/parliament-2010/blacklisting-in-employment/